For many years, Adobe Photoshop was the only game in town when it came to designing websites. However this dominance this has been eroded ever since responsive or mobile-friendly websites became the norm a few years ago.

Please don't misunderstand us, we still use the Adobe Creative suite for all kinds of creative tasks and in particular are big fans of Adobe XD, which we use for creating our Stylescapes, however when it comes to the business of designing websites, it's clear that using Photoshop to create 'flat' visuals is simply untenable. Any agency still doing this, is not offering you the most efficient and cost-effective method for your budget or providing you with a frictionless feedback loop, that is imperative to any successful website project.

The reason this way of working is no longer fit for purpose, is that websites are not posters or brochure covers but interactive experiences, seen across multiple devices. Trying to replicate this in a a few static mock-ups simply doesn't do justice to the needs of the end client or user, who will naturally have many questions about what certain things do. Having to come back to the designer multiple times to achieve a clearer understanding of their vision isn't exactly conducive to a happy working relationship. At this point, it becomes less of a creative project and more an exercise in frustration and interpretation, with certain things being lost in translation on the way.

One way some agencies find to get around this issue of presentation, is to use a tool like InVision to replicate the interactive browsing experience. However, spending additional time to load pngs or jpegs into InVision, simply to try and achieve what could be done in Webflow right from the beginning, is, in our minds, adding unnecessary complication and time, which ultimately will be reflected in the final project cost. 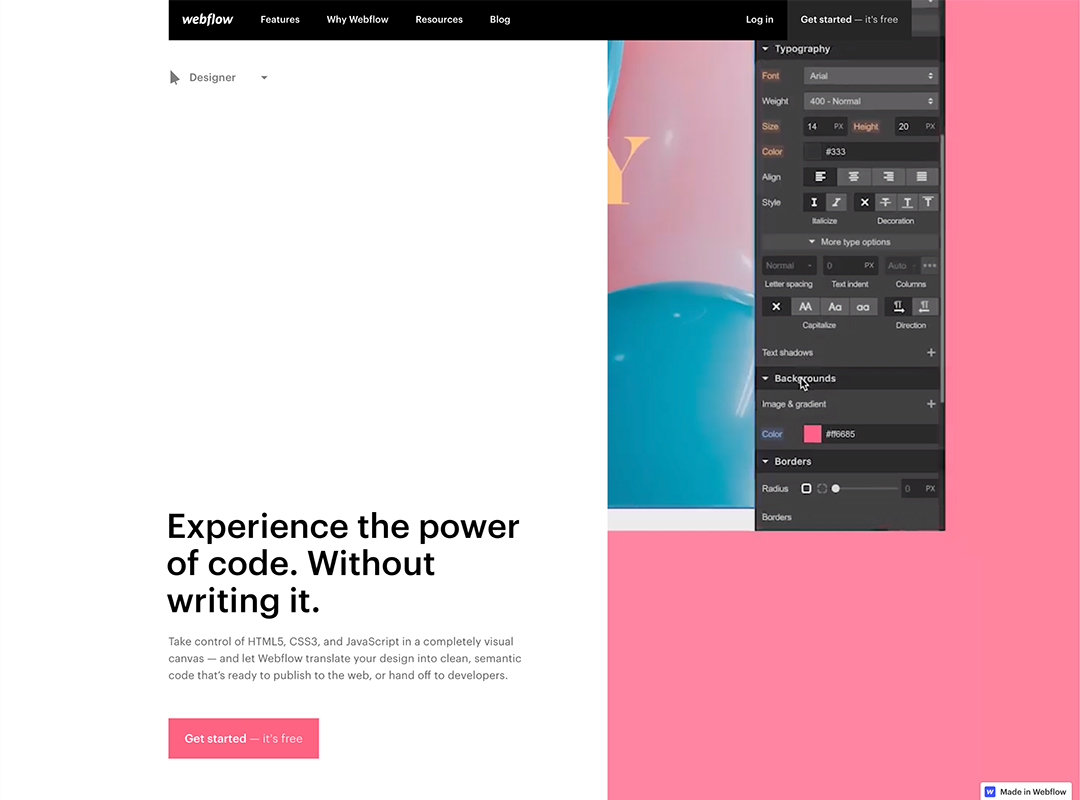 By following a linear project management approach, once these Photoshop designs have been signed-off, the next stage in the process doesn't get any easier. The developers are then handed a series of PSD files, and begin the time-consuming process of coding the designs into HTML, CSS and integrating it with the chosen CMS platform, often a WordPress theme.

Once again, the opportunity for miscommunication is rife, as unless a Designer has carefully briefed the developer on all the finer details, there is likely to be a knowledge gap, which leads to numerous iterations, phone-calls and emails to agree on what should be done at a granular level. At best, it disrupts the smooth flow of the project and at worst, it undermines client confidence in the agency and its ability to deliver.

This is where Webflow comes into its own, as it neatly spans the bridge between Design and Development, effectively making them one and the same. This means that rather than spend thousands of extra pounds on technical developers to write code, money can be directed where it can have the most impact - namely producing visually stunning and dynamic website experiences for your audience.

In addition, the end user can view an early design prototype which will completely alleviate a larger number of potential questions around functionality, as the designer will already have decided what happens when someone clicks on a call to action button or how the images behave when viewed on a tablet.

Finally, the term 'swop and poop' has been coined to explain a CEO, MD or senior board member taking a look at a new website in development shortly before launch, not liking the result and forcing a major rethink. However once again this scenario is avoidable, as involving key stakeholders earlier in the process, simply by sharing a Webflow link that they can view on their devices, ensures that the chances of late changes are drastically minimised. It's a win-win situation, as the website project gets delivered on time, on budget and to the satisfaction of everyone involved within the design and project team.

What is a CMS?

What are User Personas?

What is a wireframe?